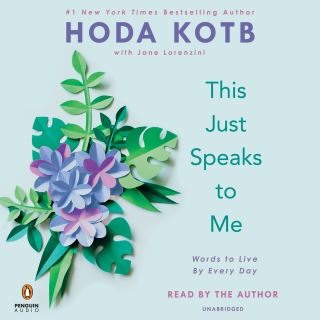 This Just Speaks to Me

Words to Live By Every Day

When her first collection of quotes, I Really Needed This Today, was published in 2019, Hoda never imagined how deeply her favorite words, stories, and memories would resonate with readers. People across the country were connected not only by the book's positive message, but through their generosity in sharing it with friends and family who needed a daily burst of inspiration. Hoda was truly touched by fans who shared "their quote" with her, the one that most moved them or someone they love.

Now, to follow that remarkable experience, Hoda is back, with 365 new quotes and stories to share with her beloved readers. In This Just Speaks to Me, she writes about the people and moments that have enriched her life, discussing everything from motherhood and friendship to love and loss. The book also celebrates the countless acts of kindness that unfolded during these uniquely challenging times. Told with the same warmth, humor, and generosity that infused I Really Needed This Today, This Just Speaks to Me promises to be the next great companion book, each day elevated by Hoda's sparkle at a time when we may need it the most.

Hoda Kotb: Hoda Kotb was named co-host of the fourth hour of Today in 2007 and co-host of the flagship hour in 2018. She has also been a Dateline NBC correspondent since 1998 and is a New York Times bestselling author of the books I Really Needed This Today, Hoda, and Ten Years Later, as well as of her two children's books, I've Loved You Since Forever and You Are My Happy. The four-time Emmy winner has also been honored multiple times with the Alliance for Women in Media's Gracie Award (most recently in 2019), as well as with the 2006 Peabody Award and the 2002 Edward R. Morrow Award. Hoda resides in New York City with her fiancé, Joel, and her daughters, Haley and Hope.

Jane Lorenzini released her debut novel, After the Rain, in October 2018. Prior to that, she spent thirteen years as a television news anchor and reporter. Jane went on to co-write three New York Times bestselling books--I Really Needed This Today, Hoda, and Ten Years Later--plus a fourth book, Where We Belong, with Today co-host and dear friend Hoda Kotb. She lives in Tennessee and is currently writing the sequel to her first novel.